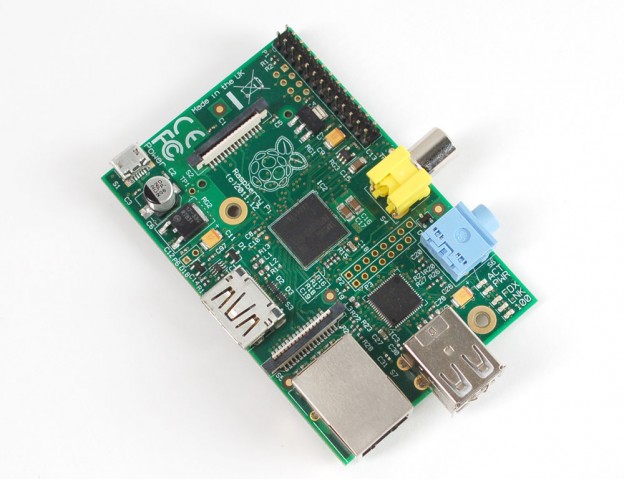 The Raspberry Pi® is a single-board computer developed in the UK by the Raspberry Pi Foundation with the intention of stimulating the teaching of basic computer science in schools. The Raspberry Pi is a credit-card sized computer that plugs into your TV and a keyboard. It’s a capable little PC which can be used for many of the things that your desktop PC does, like spreadsheets, word-processing and games. It also plays high-definition video. The design is based around a Broadcom BCM2835 SoC, which includes an ARM1176JZF-S 700 MHz processor, VideoCore IV GPU, and 256 or 512 Megabytes of RAM. The design does not include a built-in hard disk or solid-state drive, instead relying on an SD card for booting and long-term storage. This board is intended to run Linux kernel based operating systems.

This is the Raspberry Pi Model B 512MB RAM model with two USB ports and a 10/100 Ethernet controller. Please note some boards are made in the UK, some in China. WE DO NOT KNOW IN ADVANCE WHICH ONES YOU MAY RECEIVE!
As typical of modern computers, generic USB keyboards and mice are compatible with the Raspberry Pi. The Raspberry Pi use Linux-kernel based operating systems. The Raspberry Pi does not come with a real-time clock, so an OS must use a network time server, or ask the user for time information at boot time to get access to time and date info for file time and date stamping. However a real time clock (such as the DS1307) with battery backup can be easily added via the I2C interface.